Carrying the phone in your bra or pocket? You should read this | VEST | Radiation Blocking Products for Everyday Use
0 Items

Carrying the phone in your bra or pocket? You should read this 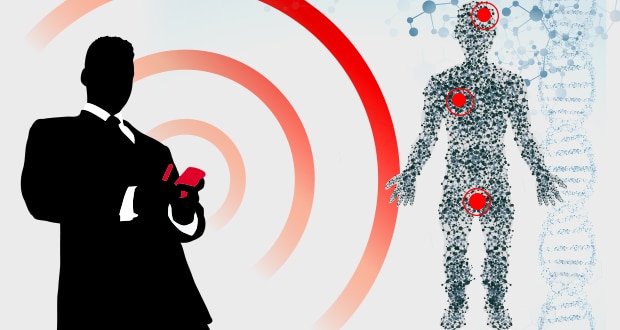 Do you still carry your phone in your pocket or bra?

Numerous recent studies and cases have shown that there may be a strong connection between a number of debilitating problems to the body amongst them even tumors.

Carrying the phone in your bra? You should read this:

One interesting case that can serve as an illustrative warning of the cancer-causing potential of cell phones is that of a young woman with no other predisposing risk factors for cancer who came down with multi-focal breast cancer. As it turns out, the young lady had the curious habit of tucking her cell phone into her bra…

Two cancer specialists, Robert Nagourney and John West, concluded there was only one other possibility that might have directly contributed to her breast cancer. “We connected the dots,” the patient said. And the dots―quite literally the pattern of the cancer, and distribution of the cancerous cells―lined up perfectly with the shape of her cell phone.

You can catch the video on the case here: https://www.youtube.com/watch?v=BJib5GHxOsE

For many years now, skeptics have argued that the epidemiological studies pointing to a tumor risk from cell phones must be wrong, because no one has seen an increase in cell-phone related tumors in the general population.

Another example from a research published in 2009 showed evidence that wearing a cell phone on your hip may weaken an area of your pelvis. This study was done on 150 men who carried their phones for 15 hours a day for a period of 6 years.

You can check the study here:

More notable as of lately is the issue of infertility on both male and female caused by carrying their phones in their pockets / bra.

The researchers from the University of Newcastle in Australia reviewed 27 scientific papers investigating the effects of radiofrequency electromagnetic radiation (RF-EMR) on the male reproductive system. Of the 27 analyzed studies, 21 reported some kind of adverse impact on male fertility due to the effects of smartphone radiation.
Learn more here: https://www.ncbi.nlm.nih.gov/pubmed/27601711

What about women fertility?

A newly published study by Courtney Lynch and her colleagues found for women trying to get pregnant that stress as measured by the alpha-amylase levels in their saliva predicted whether they were successful. The researchers found that women with the highest levels of this enzyme in their saliva had a 29 percent lower probability of pregnancy compared to those with the lowest levels.

Although this study did not examine EMF exposure, earlier research published by Christoph Augner and his colleagues found that people who lived within 100 meters of cell phone towers had greater salivary alpha-amylase levels. In an experimental study, the researchers found that exposure to higher levels of GSM cell tower radiation increased the levels of this salivary enzyme, meaning this could lead to the same fertility problems and higher stress levels.

There are more examples like the above for headaches, stress and more problems which are deriving from the extremely close use of wireless technology.

The most important reason to keep the cell phone away from your body is because the World Health Organization has classified mobile phones, and any wireless devices that use microwaves to communicate, as a group 2B risk − which means that they are possibly carcinogenic to humans. Many believe that the evidence is already strong enough to classify mobile phones as definite cancer causers. They point to the increased incidence of cancer in areas of the body closest to where cell phones are carried and used. For example, testicular cancer in men occurs more frequently in the testes closest to where cell phones are carried. The radiation guidelines, established by the FCC in 1996, assumed users would carry their cellphones at least a small distance away from the body.

So what should you do?

Some simple steps you should take are:

Now, we realize that the phones / laptop and all other wireless technology has become a part of our daily life, sometimes, even keeping it at foot length away from our body is not possible!

That is why Vest Tech was born. we offer wallet cases, slim cell phone cases, laptop shields, belly bands, and even blankets that protect both male and female counterparts from the exposure to electromagnetic radiation.

We achieve the mission by providing an entire category of products built on innovative tested and proven technologies, delivered in a contemporary design. Our wallet cases will allow you to carry the phone in your pocket safer, our shields will allow you to use your laptop on your lap and our headset will allow you to talk and listen to music with minimum exposure to radiation!

Feel free to visit our site to learn about our entire range of solutions and learn more tips on protecting yourself.